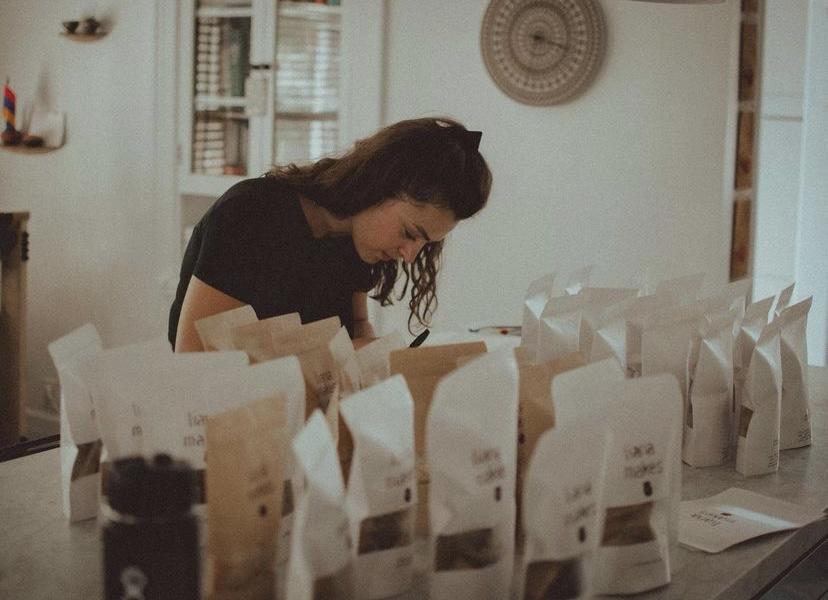 The Story of Liana Makes: A Modern Twist on a Traditional Armenian Pastry

I first learned about Liana Makes when a beautifully curated photo of some plated nazouks appeared on my Instagram feed. Truthfully, I hadn’t known about nazouk before seeing this photo. I soon learned, as the picture suggested, that they are a small, flaky dessert pastry nicely paired with soorj. I saw the photo on a new Instagram account called ‘Liana Makes,’ and realized that they belonged to my LA-based cousin, Liana Arshagouni.

This was during the war in Artsakh, when the Armenian community was mobilizing on social media to bring awareness to the threat to our collective homeland. Armenian activists were taking to Instagram live to educate both Armenians and non-Armenians about the deadly conflict, and many encouraged their Instagram followers to donate funds to reputable nonprofits doing important on-the-ground-work and providing essential supplies to Armenian soldiers and wounded civilians.

Not only had Liana begun baking and packaging large batches of Nazouks to be sold on her own, but she had started a small but powerful movement of community engagement and fundraising around a batch of homemade Armenian pastries, with a recipe passed down from her grandmother. Here, I interview Liana to learn more about her online pastry shop turned fundraising tool, and learn more about her utilization of Instagram to reach and educate her hundreds of followers.

Where did you find the inspiration for Liana Makes?

It started with the Artsakh War. A lot of my friends were doing different things to contribute to charity efforts and I wanted to find a way to make my own impact, in a way that felt authentic to me.

A lot of my upbringing was associated with food and what it meant to sit around the table and share a meal. In my case, baking was something that my sister and I always grew up with. I associated so many of my favorite Armenian desserts with my grandma, whom we call Nan.

I realized that I didn’t know how to make my favorite dessert, nazouk. So, I went to the Ararat home where my grandmother lives and asked her for the recipe. After baking my first batch, my family tried them and told me how delicious they were. I sent the nazouk to my grandmother, and she was so happy with them too. So, this is really what started my idea to sell them. I figured that this would be the perfect way for me to bring awareness to the cause, to the situation in Armenia and Artsakh, and to teach my non-Armenian friends about Armenian food and current events.

In the beginning, I was using safe ingredients that people were familiar with, like chocolate and cinnamon, so that the dessert didn’t feel intimidating. But, as things evolved, I started creating my own variations of the pastry using Armenian ingredients, like rosewater, apricots, tahini, and Armenian coffee. Upon incorporating those ingredients, I thought about their history and symbolism. Apricot trees are popular in Armenia and many instruments are made from apricot wood, including the duduks. Armenian coffee is associated with divination and coffee ground fortune-telling, and one of my last memories of my grandfather was listening to him read our coffee cups during Christmas time. Then, near Valentine’s day, I thought of a rosewater flavored nazouk. Tahini can be savory and sweet, and so there’s versatility with using this ingredient. I really tried to tie in some of the culture into the ingredients.

What was the process of collecting donations and spreading the word?

Ultimately, I raised a few hundred dollars to donate to different charities. I solely used Instagram, and all requests for these bags of nazouks came in through direct messages. If I had extra bags, I would create a post through which people could buy them. I also had a contactless pickup event at my house. Many people, even those who hadn’t bought batches, contacted me to show their support or to learn more about the dessert, Armenia, and the cause.

A friend of a friend even contacted me once to share a project she was working on, in which she made nazouk and lavash platters out of clay. We decided to collaborate. She bought my nazouks, brought them to her pottery studio where she introduced nazouks and their history and cultural significance, to her own pottery community.

What were some of the charities you decided to donate to, and what mademake you choose them?

I first started with the Paros Foundation, because I knew many people, including friends and family, who were part of the organization. I also learned that they divided up the donation funds as needed. I donated the next portion of funds to the Armenian Wounded Heroes Fund for April 24th. I chose this next organization because one of my coworkers is a veteran, and he had previously told me about his experiences going through a war and emerging without much support from his community. This really resonated with me and reminded me about the importance of taking care of those who have sacrificed so much for us, especially those who have returned with mental illness, injuries, and various disabilities.

Tell me about your time at Queernisage!

The same friend of a friend  who sculpted nazouk and lavash plates also turned out to be a main organizer for Queernisage (@galas_la), an event for the Armenian LGBTQ+ community, and she invited me to share my nazouks with the crowd. At this event, there were all sorts of vendors from across the country, making a wide range of products including scarfs, jewelry, and oils. At Queernisage, we were all doing our part to modernize and bring relevance to our Armenian traditions.