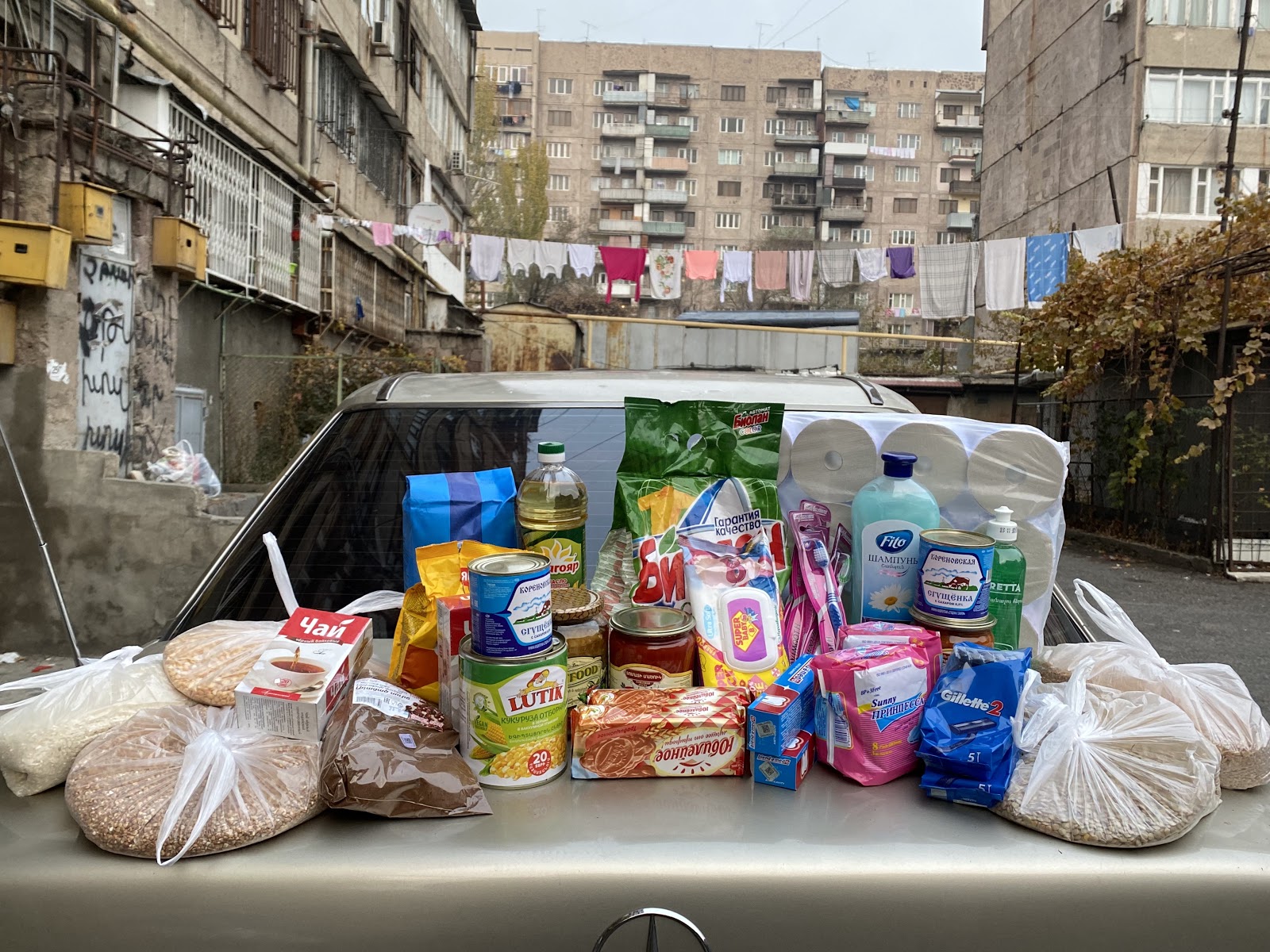 Eyes On Artsakh: The Aftermath of War and Displacement

Glendale natives Melanie Moradi and RP Zargarian landed in Armenia in early November, in the midst of the calamity brought on by Azerbaijan’s attacks on Armenia and Artsakh. After 45 days of war, the latest stage of the three-decade long conflict between Armenia and Azerbaijan culminated in a peace deal that forced thousands of Artsakh families to be uprooted from their homes and seek refuge in Armenia.

The war resulted in an estimated 5,000 deaths and upwards of 100,000 civilians who have fled their homes in Artsakh.  Even after the violence and bloodshed has come to a halt, the battle to survive continues for displaced Artsakh families. Twenty-six-year-olds Moradi and Zargarian created Eyes On Artsakh in an effort to organize and assist families of fallen soldiers and the displaced people of Artsakh. They have leveraged social media to share the stories of Artsakh families, raise awareness, and collect donations.

I first spoke to Moradi and Zargarian in early December, they explained that they spend their days packaging and delivering necessities to Artsakhtsis across Yerevan, the Ararat region, and other rural villages. These necessities included food, warm clothes for the winter time, toys, electric heaters, and financial aid.

“We are using the donations to go to the wholesale market to buy a lot of food and hygiene products in bulk,” Moradi explained, “But we’re also listening to their needs. They need warm clothes, heaters, help to pay utility bills, and other essentials.”

As they deliver aid, Moradi and Zargarian have witnessed scarce living conditions as overcrowding and a lack of monetary resources are rampant.

This is the home of Mariam and her four younger siblings ages five, seven, nine, and less than one year old.

“They have one bed and one crib in their home. No bathroom, no kitchen, dirt floors, and no central heating” said Moradi back in December.

Photo taken by Garbis Toprakjian. Mariam, 3/4 of her siblings, and Melanie.

“These houses are not in good shape. There are kids who are sick, little infant children,” said Zargarian, describing  another living condition in which eleven people are living in a house boarded with cardboard. The inhabitants consist of “three families, eight adults, and three kids the ages of five, eight months, and six months. Both infants have chickenpox,” @eyesonartsakh reported on Instagram in late November.The families are all former residents of Karintak, Shushi.

Photo taken by Melanie Moradi. The house boarded with cardboard.

In addition to suffering Azerbaijan’s brutal attacks and the loss of all their property, Artsakh refugees are facing a housing shortage. “There is nothing affordable, nothing available in their region. It’s just not working out for these people at all, and it’s really hard,” Zargarian explained.

“In the villages, they are looking out for one another,” Moradi added. “Whatever is vacant they’re allowing people to stay in for free. In Yerevan, it’s a little bit of a different story. A lot of landlords  are hesitant to give their vacant properties to people from Artsakh. We’ve heard stories of people actually being denied if they’re from Artsakh, because renters know that they won’t be able to afford rent and that it can be a long term stay which will ultimately take away from their profit. Most of the people (displaced Artsakh families) in Yerevan are staying with families, resulting in crowded living situations. Host families are finding it difficult to provide food and other necessities.”

As Moradi and Zargarian interact with more and more families each day, they heard from Artsakh refugees that there is no sign of government aid.

The biggest concern of displaced Artsakh families is always their long term economic survival. “Now we are giving them aid, but how long can this possibly last? They need jobs,” explained Moradi.

Moradi said that the most common statement she has heard from Artsakhtsis is “մենք էս շորերով ենք դուրս եկել. We left with the same clothes that we’re wearing right now.”

Shortly after Moradi landed in Armenia, she reunited with her good friend Saro Saryan who ran one of the most well-known bed and breakfasts in Shushi. “I visited them in Yerevan because they’re displaced here after their home had been shelled,” she said. “I heard that their son Samvel was injured in war. We went and saw him, and his left leg was nearly completely amputated. He has a little girl and a wife. He was in amazing spirits.”

Samvel’s resilience echoes in the hearts of thousands of Artsakh families, citizens of Armenia, and the global Armenian diaspora. To be Armenian is to come from a lineage of resilience, of people who not only survive, but prosper. People who have faced the efforts of governments past and present to wipe them out. Through camaraderie and unity, Armenians have prevailed and will continue to come together.

Moradi and Zargarian encourage the diaspora to use their own skills and do what they can to aid the displaced families of Artsakh.

“I would urge whoever is able to come to Armenia and volunteer. I know it’s easier said than done, because people have school, work, and responsibilities, but if you are able to and are thinking about it, come. There is a lot, a lot, a lot, a lot of work to do,” said Moradi. “Long-term,” Zargarian added, “if we are talking about a real impact on the economy, helping communities, and creating jobs, the diaspora’s responsibility should be to branch out and bring business here.”

“Take pride in what you can do,” Zargarian continued, “look at your profession and do your best. I studied photojournalism, so I came here to document and to help people. What Eyes on Artsakh represents is to look at who you are and try to incorporate that into helping your motherland, your people.”

Moradi said, “Every single person that we’ve talked to has said that they see the diaspora and how much they are helping. They don’t feel alone in this. We need to keep that fire going. Don’t let the motherland down. Let’s show them that we’re with them through and through. The fire we had in the beginning, we need now more than ever.”

I recently caught up with Melanie Moradi, who is still in Armenia,  in mid April. She shared that Eyes on Artsakh with the help of their friend Arakel and Jay Jay (@jayjaystudios), raised $10,000 dollars via Instagram live to help Mariam and her younger siblings remodel their home and get basic needs.

Moradi further explained that Eyes on Artsakh has “transitioned into providing monthly stipends for families of fallen and wounded soldiers.” They have connected with 15 families of fallen or wounded soldiers who need financial assistance to rehabilitate their livelihoods. Moradi said, “one of the families we met with consists of a soldier with an amputated arm that was cut way too short. He is having a lot of pain and is having trouble finding prosthetics or a doctor that will be able to operate on him.” It is important for Eyes on Artsakh to not only provide monthly financial aid, but to understand and support each families’ unique needs and individual situations.

“Our goal with this program is to help families whose main bread-winner was either wounded or fallen, so that we can help them rehabilitate back to their independent lives,” said Moradi. The stipends will be provided until funds run out, to contribute to these monthly stipends visit and follow  @eyesonartsakh on Instagram.