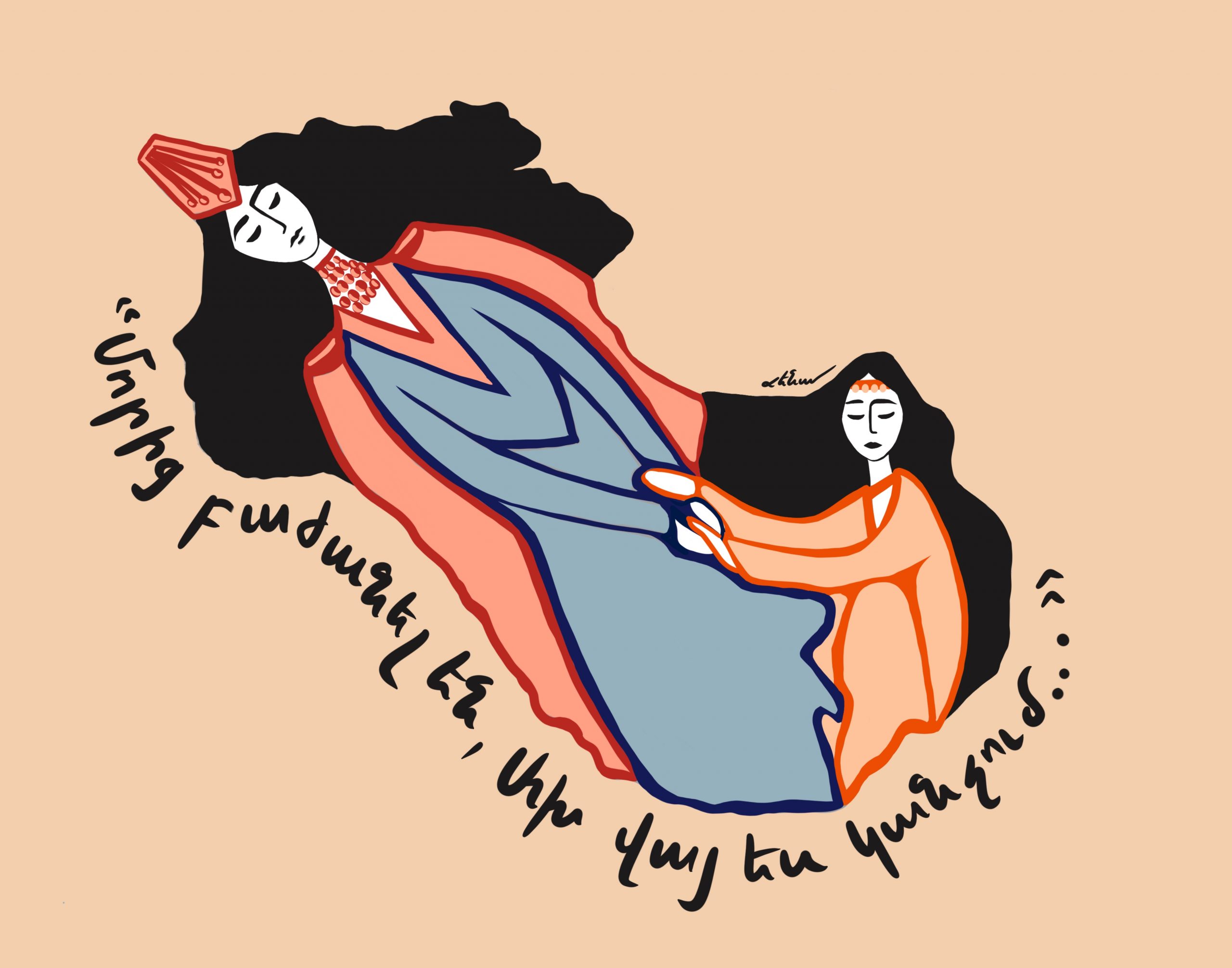 Art After the War: A Conversation with Lena Halteh

I first interviewed Lena Halteh during the 2020 Artsakh War, when we were both focused on selling our creative work to fundraise for immediate aid on the ground, and creating urgent content to raise awareness, and advocate for people in Artsakh.

Looking back at our conversation, I can feel the distress we shared, as well as the overwhelming drive we had to make our voices heard.

“I remember how my mom would always boycott Turkish goods,” she said. “I’d be like ‘Come on, this is a cool towel’ but she never let her guard down. And now I see why. This war is unbelievable.  It’s disturbing—you can’t even put words to it.”

Living in the diaspora, neither of us experienced the war firsthand, but like so many Armenians around the world, we could think of nothing else. We discussed the discomfort we felt seeing lighter content on Instagram, and the unity we felt as part of a movement of Armenian creatives.

After my original story never saw the light due to the chaos and ever-changing events of those times, I decided to speak to Lena again, one year later. I was in Armenia and the reality of the war seemed to color everything, a slow crisis unfolding under the surface of daily life. Revisiting my conversation with Lena prompted me to consider questions that had bothered me ever since the ceasefire was signed: How do we shift to long-term activism while still recognizing the grave nature of the situation in Armenia and Artsakh? What role can creatives have in advocating for Armenians and supporting our communities? How can we contribute to Armenian causes from the diaspora?

I asked Lena how her work had changed since we last talked.

“When the war was over the story wasn’t over,” she said. “But there was this fatigue and exhaustion. During the war I was churning things out very frequently, and it just reached a point where I needed to step back and fill up my cup again.”

Her words described feelings familiar to me as well. After my own 45-day frenzy of organizing and writing, I too had felt the need to step back, re-center, and find a new direction for myself. I felt that I could no longer continue my efforts, and furthermore, that the things I was doing would not contribute as much as they had once seemed to.

“I think it’s a realization many of us came to—that there’s always something going on,” said Lena. “There are always causes and injustices, and we should be in tune with all those things, but not feel pressured to create something for everything that goes on in the world, even if we might want to.”

“We’re all human beings at the end of the day; none of us can do everything,” I agreed. It felt like a reminder that I needed myself.

After the war, Lena took a step back from Instagram, where she had been creating digital drawings regularly. She still posts her work, but focuses on letting her creative process take shape organically, rather than feeling a pressure to force out work. She has also moved back to the medium of paint, working with gouache and acrylics, and enjoying the feeling of rediscovering the material.

“During the war I did a lot of digital work because there was that immediacy of creating things, getting them printed, and fundraising, so digital was ideal for that,” said Lena. “But now in this season, it’s been a time to slow down and explore again with paint. I really felt the difference of enjoying how the paint responds and how to use the brush. Getting reacquainted with the medium was very special and therapeutic.”

The therapeutic nature of creative work seems especially relevant when thinking about community work in a long-term struggle for survival. How can each of us harness our creativity to nourish our own spirit and those of others? How can our imaginations breathe life into our communities and collective worlds?

Lena spoke about the way she thinks about her own art in the larger area of culture, specifically the importance of representation.

“I think there are different voices out there that can contribute to activism in more subtle ways,” Lena said. “I’m so blown away by how different things are nowadays than when I was growing up. I never saw myself reflected in art. The standard of beauty was basically an Abercrombie model. One time I even had a co-worker come up and say to me, ‘Lena, you are so princess Jasmine.’ And that’s a testament to the images we grew up with. I wanted to see myself and my children reflected in art. That’s where it started, and it’s been evolving from just representing myself to different images of Armenians. When I was first creating these images, I became aware that everything I was creating looked only like me, so I had to step back and think about how to vary my representation a little bit. It can be a challenge to represent everybody, but if we can just be aware and conscious and vary it, that’s huge in itself.”

As Armenians, and in our other identities, many of us can remember the feeling of never seeing ourselves represented in the images we grew up with. We are lucky if we can also remember seeing ourselves represented for the first time: the empowering feeling of admiring something that looks like you. If nothing else, that feeling can show us the impact that art can have.

Lena commented on her desire to represent positive themes in her work, and to add her own brush to the collage that makes up today’s Armenian art and culture.

“I think there’s always a hopeful tone to the work I put out there,” she said. “But after the war I began searching for another way that I could continue to share our story and our culture with a different kind of tone and intention. I think it became a very clear mission for creators after the war—to share Armenian content in whatever way that works for you.”

For weeks after our conversation was over, I reflected on this idea. After the ceasefire, I had felt conflicted about my own role as a creative; expressing myself artistically often felt futile and self-indulgent, while at the same time I felt a desperate need to contribute in some way.

While I was in Armenia, frequent walks down Komitas Street, and passing billboards of famous artists and writers reminded me of one of the things I love most about Armenian culture. Armenian culture as I know it holds a great reverence for artists, writers, and creators. We often think and speak about the role of historical figures like Komitas, Raffi, or Zabel Yesayan in preserving Armenian culture as we know it today. The creators who have become historical figures are only a small part of it as well—I think also of the unnamed individuals and groups whose legacies live on in our traditional dances, proverbs, foods, handcrafts, and other cultural artifacts. As creatives today, we are shaping the Armenian culture of the future, as our ancestors did for us.